This is a significant update for Facebook Advertisers. According to reports, Facebook is removing its restrictions on ads which include more than 20% text in the main image.

As shared by social media expert Matt Navarra, Facebook is contacting advertisers direct to inform them of the update, explaining that:

“…we will no longer penalize ads with higher amounts of image text in auctions and delivery.”

We’ve asked Facebook for further confirmation, but as per the above note, the platform is currently in the process of updating its documentation to reflect this update – on the Facebook Help page about text in ad images, for example, it now says:

A previous version of this overview outlined the specific ad limits:

“To create a better experience for viewers and advertisers, ads that appear on Facebook, Instagram, and the Audience Network are screened based on the amount of image text used in your ad. Based on this review, advertisements with a higher percentage of image text may not be shown. Please note that exceptions may apply to certain ad images. For example, exemptions apply to book covers, album covers and product images.”

The rule, as you can see, was pretty clear – ads with too much text in their images would not be approved.

Facebook even provided a Text Overlay tool to check if that your ad aligns with the 20% restriction. 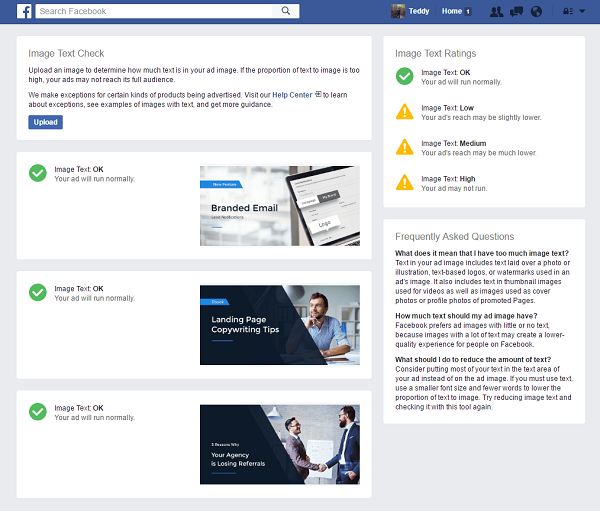 That tool is also no longer available, as Facebook looks to ease back its text in ad image restrictions.

Facebook’s long-held text restrictions in ad images have caused major headaches for many advertisers, requiring significant, specific reformatting of ad images in order to align with Facebook’s ad rules. At times, Facebook’s enforcement process in this respect has also been flawed, so it’ll be a relief to many to see those limits taken away.

Why did Facebook have the text limit at all?

Over the years, Facebook has repeatedly noted that Facebook and Instagram users dislike ads with too much text in the main image, so it’s restricted such seemingly to improve the general user experience.

Facebook did. however, change its ad text rules back in 2018, which enabled marketers to include more text in their ads, but their ad reach would be restricted as a result, relative to how much you exceeded the limit (this is reflected in the image above).

This new update, apparently, removes any reach restriction for this, meaning that ads with more than 20% text in the main image will be displayed, as normal, and will reach the same amount of people as any other Facebook ad. As you can see in the official explanation, Facebook still maintains that ad images with less than 20% text perform better, and recommends that advertisers “keep your text short, clear and concise in order to get your message across effectively”.

But if you include more text in your ad image, your ad will run, and could theoretically reach just as many people as any other campaign, depending on your approach.

Receive the latest tips via email.